Wow - how time flies when you least expect it!

I'm currently teaching a tatting class, and for those of you that missed class last Saturday.  We missed all of you!  I was able to help those who were there individually, and would be happy to help anyone who needs it, I'm just a phone call away!
Posted by Bonneville Tatters History at 10:43 AM No comments:

This week I'm visiting the lovely states of Washington and Oregon.  Lynn is at a National meeting and while he is in meetings all week, I will be tatting, exploring, tatting, visiting family, tatting, and just relaxing and seeing all the beautiful nature available that's been provided for our enjoyment!

Currently I am tatting a couple of pieces for our next Bonneville Tatters "challenge" project.  I will post pictures when I get them finished!  I hope to get lots of participation!  I want to change the name of 'challenge' to I don't know what yet!  Basically I want the tatters to "think outside of the box"!  The box consists of buttons, jewelry findings, rick rack, etc.  Take these items out of the box and use them with your tatting!  I will show a few samples forthcoming!

One pattern I am using is Karey Solomon's "Bead and Button Star", on page 13 of her book - Tatting With Buttons.  I've seen lots of pretty designs made with this pattern!  They are awesome.  I chose to use size 20 Lizbeth thread!  And with different size buttons.  I've also added some "petals" to one of them to simulate a flower.  I would appreciate any comments!  Thank you in advance!

This last month I saw an idea from Marty Lewis and have been making earrings galore!  She had made matching earrings for her lanyard!  I loved that idea!  I made a pair to match my lanyard, and have made several other pairs to post on my Etsy Store!  It's like I wish I would have thought of it first?  Oh well, Love Marty and she is so lovely and so very creative!  She entered a couple of crocheted doilies this year into our Utah State Fair!  I didn't know she could crochet also!  She always seems to win ribbons for everything she enters!  I definitely admire her!

Posted by Bonneville Tatters History at 4:24 PM No comments:

I'm actually looking forward to autumn!  I love the fresh autumn colors and the cooler weather!  We've had several fires around the Wasatch Mountains, and hopefully our air will be refreshened soon as the fires decrease!
I had a wonderful time at the 60th Annual IOLI (formerly International Old Lacers, Inc.) (now International Organization of Lace, Inc.) Convention, here in Salt Lake City, Utah.  It was fun to see the new logo unveiled, and I'll try to put a picture of it on here soon!  I had a great time taking Karey Solomon's class, and socializing with new and old friends!  I will go into greater detail later!

Posted by Bonneville Tatters History at 11:07 PM No comments:

Top of the mornin' to you!

What a wonderful Springy sort of green day!  It'll green up with the coming of spring - just a few days away!  Yea!

Yesterday we had a wonderful guild meeting!  Lots of prizes, tatters, patterns, and just plain old "Tat and Chat"!  We socialized with great enthusiasm, and Leeza taught a great class on Pearl Tatting, and had designed a shamrock and Easter pattern to share with the group!

Jeanie taught the new tatters, and I know they went away feeling "They could do it!"

Next month is the Spokane Shuttlebirds Workshop and I'm anxiously looking forward to attending with our other tatters.  It's such a beautiful drive!

I'll post pictures, when I get my scanner up and running.  More later!

Happy Tatting for now!
Posted by Bonneville Tatters History at 7:16 PM No comments:

Hope everyone travels safe to and from their various destinations!

What goals are or are you going to make, aka New Year's Resolutions?  I, myself am going to:
1 - Tat more
2 - Update my blog more
3 - Lose weight, or at least attempt to!
4 - Get more organized!

Those are the basic ones I concentrating on for now!

Posted by Bonneville Tatters History at 10:55 PM No comments:

Yes, I'm back again - and boy has it been a long time!  I'm so ashamed of myself!  We've (hubbie and myself) have had a lot of things going on!  We returned last week from a week long trip to San Antonio, Texas, for hubbie's Mom's 89th birthday party and family reunion!  We had a great turn out, and a long drive home.  Yes, we drove, and explored, etc.  On the way home, we went through the Hopi Indian Reservation, Mineral Wells Fossil Park (Texas), Petrified Forest National Park, to name a few.  Before we left San Antonio, we visited the Alamo - "Remember the Alamo".  We had loads of fun but was sad we could not take pictures inside the Alamo!  Just outside!  So, I'll post a couple of our pictures later!

It was good to see family we hadn't seen for a couple of years.  Hubbie's brothers were there - one from Japan (who also lives in San Antonio only a few days a year), one from the Seattle area, and one from the Colorado Springs area!  Some of their children and grandchildren also attended.  It was too far for any of our children or grandchildren to attend!  Maybe next time.

Our guild Bonneville Tatters, has a new web site:  BonnevilleTatters.org.  Check it out.  We now have three meeting locations!  Things are sure heating up, and we're collecting tatters far and wide!

April was our annual trip to Spokane Washington, for the Shuttlebirds Workshop!  It was great - as usual!  Karey Solomon was there, as well as Georgia Seitz.  And then, our local teachers:  Krystle Pyette, Mary McCarthy, and Jessica Spaulding, etc.  Patti Duff and her group do a fantastic job of putting it all together.  We all had a great time!  It was sad to hear about Pete - with Snow Goose.  His health is failing and someone else was running his booth.  I think they bought him out.
Posted by Bonneville Tatters History at 12:36 AM No comments: 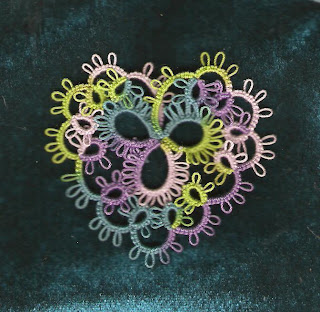 This is the heart I was talking about on my last post.  The pattern is from Handy Hands.  I used Lizbeth Thread #115 Springtime.
Posted by Bonneville Tatters History at 10:15 PM No comments:

A place to share what I am working on, what's new, resources, and your comments.